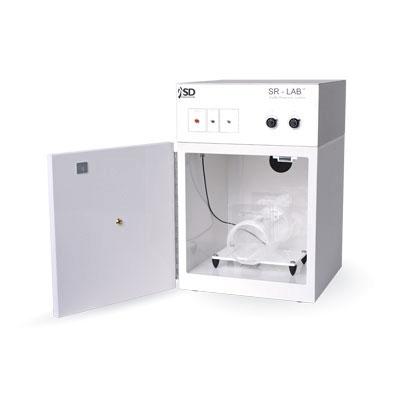 Conditioned place preference is used to test the motivation effects of events and experiences. During training, a mouse is placed in a chamber and exposed to a positive event or stimulus (food, drug administration, social interaction, etc.). In the other chamber, mice are exposed to a control event/stimulus.  Later, during testing, mice are placed in a neutral chamber and given access to the two chambers from training. The time spent in each chamber is assessed and used to measure whether or not the association formed in training resulted in a conditioned preference for the training chamber where the positive event/stimulus was presented. In order for the chambers to be easily differentiated by the mouse, unique environmental cues (CS) are present in both chambers (wallpaper, flooring, odor, etc.). As such, place preference arises from the CS (chamber/chamber "decor") - US (positive stimulus) association formed during training. Traditional conditioned place preference arenas are typically arranged so that the neutral chamber is between the two other chambers, and so that the mouse must pass through the neutral chamber in order to move between the other two chambers. This may result in confounds or scoring difficulty resulting from the time the mouse spends in the neutral chamber. Our conditioned place preference arena (see picture below) is set up so that the mouse may pass directly from one testing chamber to the other or through the neutral chamber. Access to any chamber can be restricted using a removable door; this allows for greater control by the experimenter. 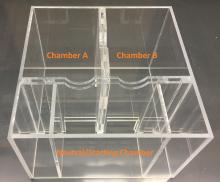 Along with the previously described conditioned place preference paradigm, variations may be conducted, including some that measure conditioned place aversion; extinction and reinstatement of the CS (chamber/chamber "decor") can also be measured. In addition, the chamber to be conditioned can be chosen in a biased (based on which chamber the mouse least "prefers" during free exploration) or unbiased (chosen by the researcher randomly). 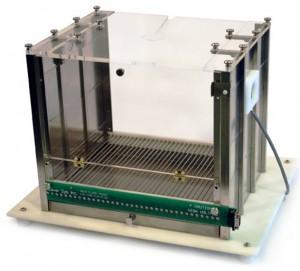 Fear Conditioning paradigms allow investigators to examine both an organism’s memory of aversive events as well as their associated sensory and motor abilities. It, along with taste aversion, is one of the only types of learning/memory that can be observed after only a single trial. Conditioning is measured by documenting and comparing the bouts of ‘freezing’ behavior (lack of any movement other than respiration) a mouse displays at different times during the procedure. Cued fear conditioning measures a mouse’s memory of a discriminative stimulus previously used to cue an aversive event/stimulus (electric shock), while contextual fear conditioning measures a mouse’s memory of a context associated with an aversive event/stimulus. Fear conditioning paradigms require minimal equipment and are easily scored.