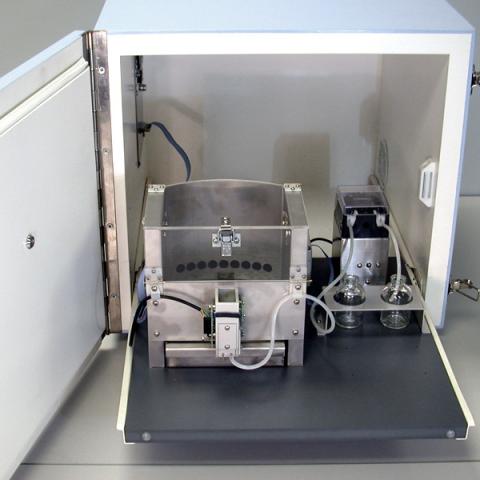 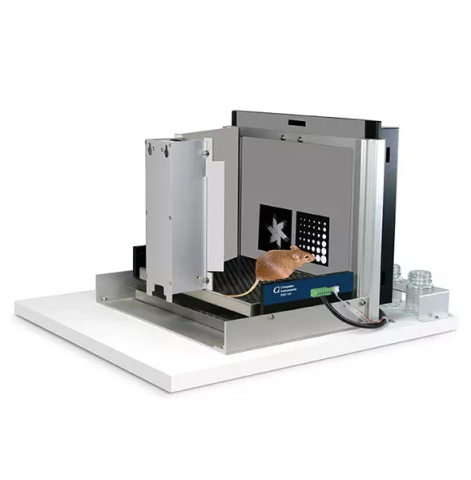 Note: Autoshaping is not a form of operant conditioning, but can be used to teach an operant behavior.

Autoshaping, conceptually, is an example of a complex behavioral reaction controlled by the steps of classical conditioning: the pairing of a conditioned stimulus (CS) and unconditioned stimulus (US) regardless of the actions of the subject. The best example of autoshaping comes from work done with pigeons: if a lighted key always turns on before a food reward is delivered, the pigeon will begin to respond to the lit key as it naturally does to the food reward, by pecking it. In this case, the key-pecking behavior has been taught through the means of classical conditioning alone. The sign-tracking (see PCA, below) of the lit-key results in responding directed to it. Because this natural responding (pecking) is also the desired operant response to a lit key, the pigeon has now acquired the response necessary to earn a reward in an operant conditioning procedure. Autoshaping in a mouse is much less straightforward, especially in a 9-hole operant chamber where sign-tracking is often illustrated by the mouse simply orienting to the hole light or moving close to it, rather than interacting with the hole itself. Too many presentations under these response-independent conditions can actually make response acquisition much more difficult. In addition, there are strain and sex differences in the amount that mice sign-track (rather than goal-track)(see Dickson et al., 2015).

Response acquisition to nose-poking in a hole-equipped operant chamber has been shown previously by Baron & Meltzer (2001) in a method adapted from one in rats (Byrne et al., 1997). This procedure results in rapid response-acquisition (two days).

Note: PCA is not actually a form of operant conditioning (although is can result in response acquisition).

Pavlovian conditioned approach is a paradigm that assess Pavlovian sign-tracking: an established model of compulsiveness in addictive behavior (in humans). In mice, this is assessed through repeated pairings of a conditioned stimulus (CS) with the appetitive reward (the US). In a 9-hole operant chamber, the CS is the illumination of one of the nose-poke response holes (it is worth noting that this differs in form and mechanically from the CS in a lever-equipped operant chamber, most used in PCA, which is the insertion of the lever into the operant chamber). This pairing leads to the classical conditioning of sign-tracking conditioned response (ST CR), CS-directed approach, and goal-tracking conditioned response (GT CR), approach to the reward receptacle. Sign-tracking attributes incentive salience to reward-related cues which is thought to contribute to increased addiction vulnerability. Sign-tracking is also associated with impulsivity and cue-induced reinstatement of drug-seeking behavior.

In some PCA paradigms (typically those involving a lever-equipped operant chamber) spontaneous response acquisition is observed.

Progressive ratio schedules of reinforcement are those in which the number of responses required increases in an arithmetic sequence (i.e. 1, 2, 4, 8, 16, etc.). The response requirement can increase on every trial or after a certain (fixed) number of trials. The last trial where the ratio was completed and reinforcement delivered is defined as an individual mouse's "breakpoint." Breakpoints can be compared across mice, condition, strain, group, etc. to compare the (maintenance of) motivation to work for rewards.

The 5-CSRTT is used to assess attention in mice and was designed to be a rodent version of the human Continuous Performance Task (CPT): a task that measures sustained and selective attention used to assess executive functioning. The mouse 5-CSRTT requires that a mouse learns to respond to the illumination of a response hole with a nose-poke. One of the nine response holes is briefly illuminated and the mouse must identify which hole was illuminated and respond to that hole with a nose poke. The shorter the illumination duration, the more difficult the task (as it requires greater attention to be paid). In addition, between trials there is an inter trial interval (ITI) during which the mouse must inhibit responding. The different kinds of responses/errors that the mouse can make in this task allow for separate measures of attention, impulsivity, and reaction time, which parallels the human CPT. This task is often used with mouse models of Schizophrenia, Alzheimer's, and Attention Deficit Disorders (among others).

The 5C-CPT is an elaboration of the 5-CSRTT that more closely models the task parameters of the human CPT. In the 5-CSRTT, mice are trained to respond to a signal stimulus: the light that could appear at any of five locations (holes), which is consistent with the CPT. Incorrect responses (to a hole not illuminated) are said to be analogous to "false alarms" in the CPT. However, in the 5-CSRTT there is no way to measure "correct rejections," the contrary measure to false alarms; there are no non-signal trials presented. The 5C-CPT incorporates non-signal trials by requiring mice to inhibit responding on trials where lights appear in all five locations.

The task involves learning that one of two shapes displayed simultaneously on the screen is correct. Touching the correct stimuli (S+) will be rewarded with food. Touching the incorrect stimuli (S-) will be punished with a timeout. Once the task has been learned, the stimuli are reversed so that the S+ stimuli now becomes the S- stimuli and vice versa. This reversal learning requires inhibition of prepotent responses and is known to be dependent on the prefrontal cortex.

In humans a similar task has proved to be highly effective for the early detection of Alzheimer's disease (AD). A 1995 study using volunteers who thought they had memory issues [named the questionable dementia (QD) group] found that CANTAB PAL could discriminate who had AD at an early stage.

The rodents are required to discriminate between two white squares on the screen. Responses to squares on one side of the screen will be rewarded, while responses on the other side of the screen will be punished with a time out period. The distance between the two squares is varied from trial to trial. Animals with lesions in the dorsal hippocampus were impaired when the locations were close together, but not when they were far apart. Once 7 out of 8 trials are responded to correctly, the correct side is reversed, adding a reversal learning component. It is sensitive to hippocampal lesions and associated with glutamate receptor regulation and signaling.