The three-chamber test is used to measure a mouse's sociability and interest in social novelty. Typically, mice prefer to spend time with other rodents (rather than alone) and investigate mice they do not recognize. In this task, mice go through a series of phases where their behavior is measured. First, they are placed in the center chamber and allowed to freely explore this chamber as well as the left and the right (both of which are empty). Next, mice can be put through a variety of tasks where they are placed in the center chamber and the left or right chamber contain either a mouse (novel or familiar) or an object (novel or familiar). In any of these variations, the subject mouse's behavior is recorded and time spent interacting or exploring the contents of the left or right chambers (mouse or object) is measured. Below is one example of a possible task set for this test: 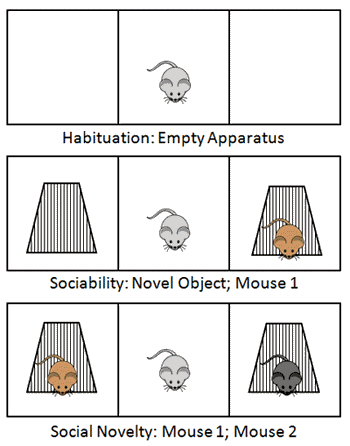 Sociability and social interest are scored using measures of sniffing and time spent in chamber (left, right, or center). "Normal" mice tend to socialize and spend more time in a compartment containing a mouse than an object. An absence of this pattern of behavior indicates a social deficit in the subject mouse. 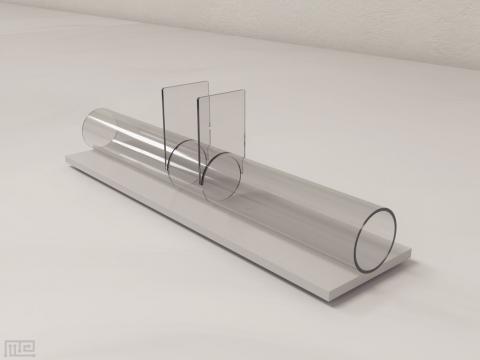 The tube dominance task allows for the investigation of social hierarchy. It is a task that induces a social conflict to measure how mice react and which mouse will "win" in this situation. Dominance asserted in the tube task that results in winning has been correlated with "winning" in other such situations. The tube task can be used to measure dominance and submission between a single pair of mice, or can be used to fully "map out" the social ranking of an entire mouse group. During training, a mouse is allowed to run through the entire tube (and in some procedures: reach a food reward on the other side). On the testing day, two mice are put into the tube (which now has a divider in the center), one from each end. Once both mice reach the center divider, it is removed and the confrontation begins. The confrontation ends when one mouse forces the other out of the tube (all four feet out). The mouse remaining in the tube is declared the winner. 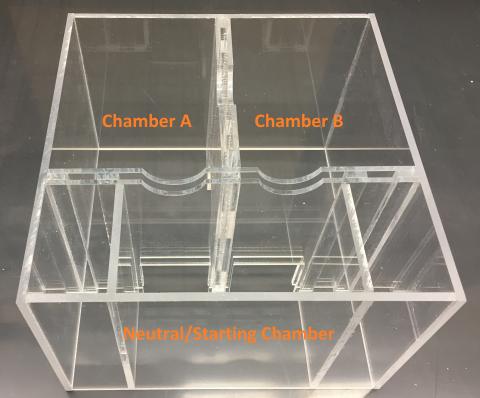