All paradigms are done using a Shuttlebox 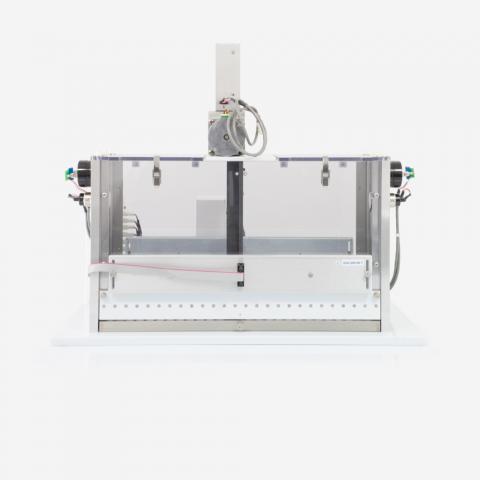 Active avoidance is what is typically thought of as avoidance learning. Due to the different associations that can be formed by the mouse during avoidance learning, it has been thought to involve both classical and operant conditioning processes (most famously characterized by Hobart Mowrer's Two-Factor Learning Theory). 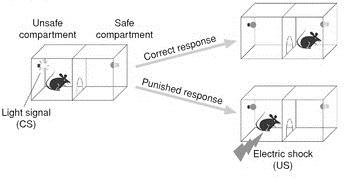 Active avoidance paradigms require the mouse to learn to avoid an aversive stimulus (a shock) by initiating a behavior (locomotion). The mouse is placed in one of the two shuttlebox compartments. They are exposed to a conditioned stimulus (light, tone, etc.) followed by the delivery of a footshock (unconditioned stimulus). Two types of responding can emerge directly after this exposure phase: a conditioned response (avoidance learning) and an unconditioned response (escape learning)--often times,escape responses precede the emergence of avoidance responses. Avoidance is characterized by responding where a mouse actively avoids the oncoming shock by moving to the opposite compartment after the CS is presented. Escape is characterized by responding where a mouse does not respond to the CS, but responds to the US by escaping to the opposite compartment. 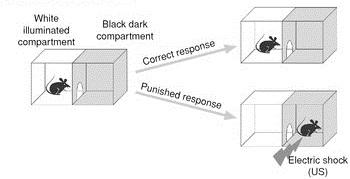 Escape conditioning occurs when an animal learns to perform an operant behavior to terminate an aversive event or stimulus. In a shuttlebox, this occurs when a mouse learns to escape (i.e. move to) the opposite compartment after receiving a footshock in their current compartment. It is a classic example of negative reinforcement.

Learned helplessness occurs when a mouse has been exposed to an inescapable aversive event or stimulus. Using a shuttlebox, a mouse is placed in one compartment with the door to the opposite compartment closed. The mouse then receives a footshock and cannot escape it. After several presentations under these circumstances, a mouse has difficulty learning to avoid or escape the footshock even when able to do so. After the unavoidable presentation of aversive stimuli (footshocks), a mouse learns that it has no control over these presentations (or its environment).  This leads to generalized helpless behavior (learned helplessness) that persists even when the environment/contingencies change so that the aversive stimuli are no longer unavoidable. Learned helplessness is a behavior associated with and influenced by depression in humans.